Uncommon moths at The Lodge

These two turned up on the walls at The Lodge, RSPB Sandy, on 26th September. The Convolvulus Hawk-moth is the 39th record for the county and the first to be found at this site.

The Large Thorn is a species that is nationally scarce and seems to be declining. It has been found at this site on a few occasions but not since 2005.
Convolvulus Hawk-moth by Andy Banthorpe 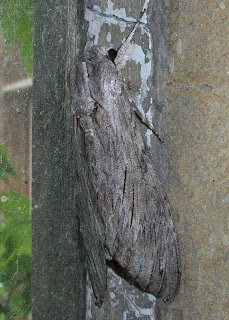 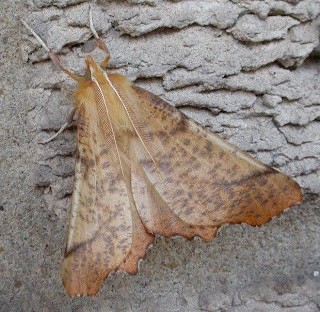 My name is Megan Peterson, and I work at an Internet map-content start-up company in Boulder, Colorado. I just perused your blog. In general, we're trying to bring information about flora & fauna (among other interests like art, hiking, etc.) onto the Internet (Google maps, for example) as well as onto GPS devices and in-car navigation units. Our initial focus is on the US, Canada & UK. Our site will be structured and dynamic, driven by our users who will create and edit content (like a Wikipedia page). Also, our site will be free to all users, registered or not.

I'm very interested in having you participate in our closed site review occurring in several weeks. Essentially, we'd give you login information, have you create a user profile, peruse the site (i.e. the flora & fauna), and give us detailed feedback. Also, we will enable you to invite others who may be interested in our site.

Ideally, you enjoy and contribute to our site, and blog about it. We're hoping this is something you'd be interested in.

Thanks for your time. Please feel free to contact me with any questions. I look forward to your response.