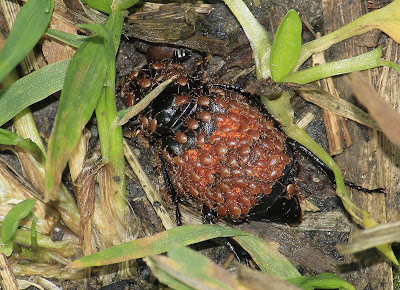 I found this burying beetle on one of the rides in Potton Wood. It has a particularly heavy load of phoretic mites, which it helps to transport between the dead carcasses that the adult beetle lays its eggs on. It has been suggeted that the mites aid the beetle larvae survive by eating fly eggs and generally cleaning up the corpses so that the beetle larvae survive better. As far as I can tell from the orange markings beneath the mites and black antennae this beetle is probably Nicophorus vespilloides.
Posted by Ian Woiwod at 15:02