Then on to Saturday 30th May, when, with Martin Green, I found two Red-veined Darters on the pool outside the cafe at Marston Vale CP. They were [expletive deleted] to photograph, but eventually I saw one land on a dead reed on the outer edge of the marginal reedbed, and, doing more pool-side teetering (and getting wet shoes) managed a record shot through the reeds: 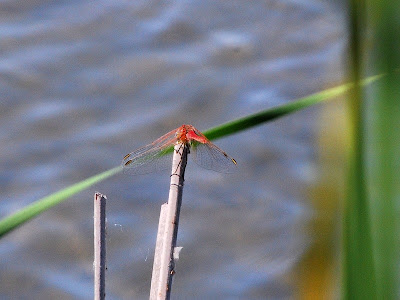 ...at least it shows the red veins and pale centres to the pterostigma (that's the little dark bits on the wingtips). While waiting for the Red-veineds to settle, and again on the following day (when they weren't present), I did manage to improve on my previous shots for four dragonfly species. 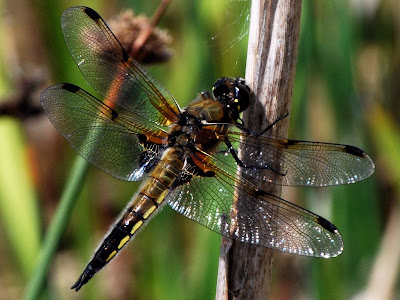 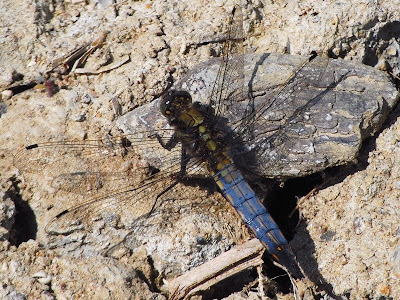 ...this is interesting as it is a male developing its adult blue pruinescence, but with traces of the teneral yellow still visible - the blue has replaced the black in the female-like pattern of a freshly emerged male, but not completely replaced the yellow. As it was behaving territorially, presumably it thought it was adult 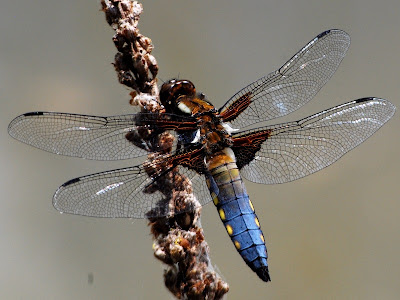 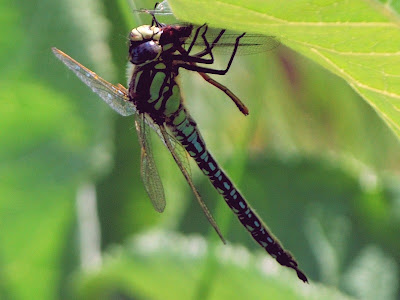 ...which I confidently ID'ed as a teneral Emperor when I saw it land on the underside of the leaf. Inspection of the photo showed it was a male Hairy Hawker, eating a Large Red Damselfly. I was of course fooled (who, me?) by the yellow-green tinge of the light shining through the leaf. I've played around with the colour balance a bit to enhance the reds and blues over the greens and yellows. This has made the light catching the wings look redder than it should, but has brought out the blue spots on the abdomen and the red on the damselfly better than on the original.